Get a $50 credit when you talk to an EMR specialist!
By submitting this form, you authorize Fusion Web Clinic to contact you with more content and information.

Get a $50 credit when you talk to an EMR specialist!
By submitting this form, you authorize Fusion Web Clinic to contact you with more content and information.

Get a $50 credit when you talk to an EMR specialist!
By submitting this form, you authorize Fusion Web Clinic to contact you with more content and information.
Menu
Request Demo

In previous posts we’ve touched on the importance of goals and different formatting styles for writing goals.  So now you’re an all-star goal writer!

If a new patient comes into your clinic tomorrow with an evaluation from another facility, you’ll be able to fix all those poorly written goals, right?

Still unsure? We're here to help you take your pediatric therapy documentation to the next level. We’ve outlined some of the most common pediatric therapy goal writing mistakes and how to fix them. Let's get started!

Problem #1: Too Many Components

EXAMPLE: Susie will produce /k, g, s, l/ and “sh” in all positions of single words with 90% accuracy.

Wow, that’s a lot to work on! This goal is essentially measuring 15 different parts.  It will be difficult to record data for this goal given all the components. To make it easier to record data and track progress, let's break this goal down into smaller components and write separate goals for each sound.

BETTER: Susie will produce /k/ in the initial position of one-syllable words with 90% accuracy.

This goal also has more than one component. If Johnny completed 10 cross crawls, but only 7 jumping jacks, how will you record that data point? If this goal was separated, then Johnny would have met one of his goals!

BETTER: Johnny will perform 10 consecutive jumping jacks after demonstration on 4 out of 5 trials.

EXAMPLE: Johnny will tie his shoes.

BETTER: Johnny will complete 7 steps of shoe tying presented on self independently on 4 out of 5 trials.

Although this may seem like a well-written goal, vocabulary is a broad area. It’s important to analyze specifically where the patient’s breakdown is occurring related to vocabulary in order to effectively structure your goal(s).

BETTER: Susie will state 3 attributes of items presented verbally on 8 out of 10 trials given verbal cues.

Problem #3: Not Defining the Context

EXAMPLE: Johnny will remain on task for 20 minutes with 80% accuracy.

Hopefully, we’ve analyzed Johnny’s behavior enough to include more specific information than this. How long can Johnny attend now and in what contexts? Maybe Johnny has good attention during play tasks, but not during seat work.

We need to define where we want this behavior to occur.

BETTER: Johnny will remain on task for 10 minutes during independent seat work given nonverbal prompts on 80% of intervals.

EXAMPLE: Susie will decrease tension during moments of disfluency by using pull-outs with 90% accuracy.

This goal is almost there, but we need context. Where do we expect Susie to be working on this? Is she still practicing in the speech therapy room? Has she progressed to peer interaction? Small group?

BETTER: Susie will decrease tension during moments of disfluency by using pull-outs during 10 minutes of one-on-one peer interaction with 90% accuracy.

Not so bad, right? With just a little work, we were able to make all these goals more specific and measurable. This will make it easier to collect data and track progress. Come progress note time, you’ll be thankful! 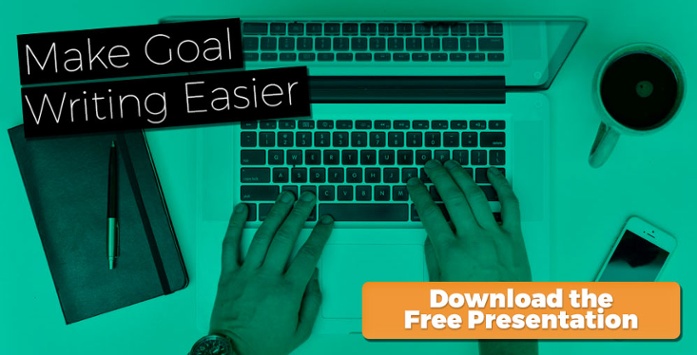 By submitting this form, you authorize Fusion Web Clinic to contact you with more content and information.

Let us know what you think